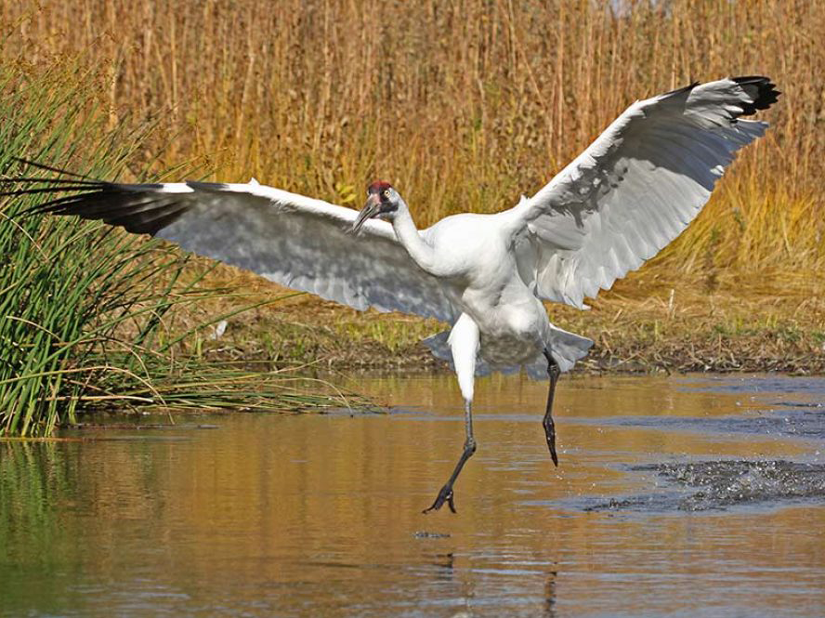 Bird watchers who were out in early June near Frank Lake Conservation Area may have witnessed a rare sight for the foothills of Alberta – a whooping crane, one of the rarest birds in North America.

Whooping cranes are the tallest bird in North America at four to five feet in height.

The bird’s main flight path is usually from the Aransas National Wildlife Refuge along the Texas coast, through Saskatchewan to Wood Buffalo National Park to nest. Occasionally, whooping cranes will summer in southern Saskatchewan, or southern and central Alberta.

While Wagner doesn’t know how the rare birds ended up south of Calgary and near the mountains, he does think that the fact that they came to an area where there is so much collaboration between organizations such as DUC, landowners, community members, naturalist groups, industry and government provides evidence that working together does result in a better environment, more habitat, and a resurgence of species at risk. He notes that in recent years, other bird species that were once low in numbers, such as trumpeter swans and peregrine falcons, are seeing their populations increase in the area.

In the 1940s, there were only 15 whooping cranes in Alberta after excessive hunting and habit loss drove them close to extinction. Now, some 80 years later, there are about 800 whooping cranes in the wild and in captivity says Wagner. While they are making a bit of comeback, they are still very rare, especially in the foothills of Alberta.

Wagner notes that one of the key reasons for this success story lies with the existence of partnerships.

In the 1950s, DUC helped stabilize water levels at Frank Lake and then later in the 1980s, an agreement between DUC and the municipal, provincial and federal governments helped ensure the lake’s viability. To date, including the recent visit by the whooping crane, 247 bird species have been spotted at Frank Lake. It’s a remarkable outcome. And with volunteers and DUC supporters like Wagner collecting data about birds and other wildlife at Frank Lake, biologists gain a better understanding of the area and its birds.

“We are so fortunate to have organizations and partnerships in our province that support conservation,” says Wagner, sighting another made-in-Alberta collaboration, the Alberta North America Waterfowl Management Partnership.

Established in 1986, the Alberta NAWMP partnership works together to conserve the province’s wetlands and associated upland habitat areas. Partners include DUC, Nature Conservancy of Canada, and the governments of Alberta and Canada.

How many birds have been spotted at Frank Lake over the years? Check out the all time bird checklist.